The terrifying floods in Kerala have been declared «the worst in over a century» as the death toll in the Indian state continues to rise.

At least 324 people have died so far, but thousands more are stranded on rooftops of flooded homes and even trees.

Shocking videos has shown the scale of the Indian disaster, including footage of cars being thrown into the air from hillside roads following a landslide.

Another video shows a huge house in Kerala state appearing to slide down a hill, as the floodwater carries it away.

Hundreds of troops, and dozens of boats and helicopters have been summoned to evacuate people.

A special train carrying drinking water has also been sent into the state.

For many it is a race against time, as weather forecasts predict more heavy rain and strong winds this weekend.

However, getting the emergency services into the area has proved difficult, after the floodwater forced the shutdown of the local international airport.

Prime Minister Narendra Modi has flown over the worst-hit sites and met state officials to discuss the crisis.

Kerala is typically a popular tourist resort among global travellers for its tropical hills and beaches.

However, record monsoon rainfall this year has left nearly 1,000 people dead since June.

Kerala’s chief minister, Pinarayi Vijayan, said that more than 314,000 people were now living in more than 2,000 emergency relief camps set up in the area. 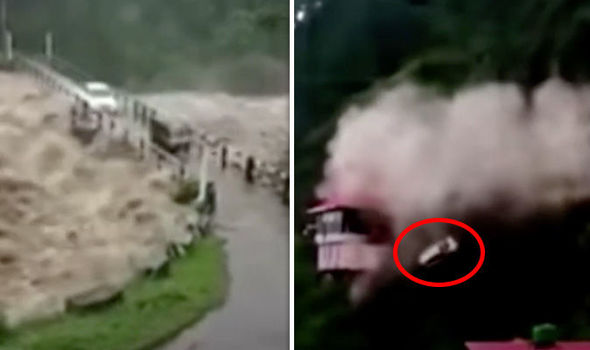 Mr Vijayan added that state was experiencing an “extremely grave” crisis, with the highest flood warning in place in 12 of its 14 regions.

In an astonishing scene yesterday, a heavily pregnant woman stranded by floods was airlifted the safety and moments later gave birth.

Large swathes of the state are under water, rendering roads and trainlines impassable, as well as shutting down electricity.

There are also mounting concerns over Kerala’s 80 dams, which are all being overwhelmed.