In a move which has prompted considerable consternation both internally and externally, 53-year-old Ms Kneissl asked Mr Putin if he would attend the service, at a vineyard in the south of the country – and he responded by accepting her invitation, and danced arm in arm with her after she and new husband Wolfgang Mellinger tied the knot.

In a bizarre twist, various media outlets Mr Putin brought the choir to perform the wedding as a “gift” to the newlyweds.

The foreign ministry had previously said the event was a private affair, with the media excluded, but Mr Putin’s attendance has raised its profile enormously, especially given that he is scheduled to meet Mrs Merkel at her country retreat just outside Berlin for talks.

Russia was instrumental in the liberation of Austria in 1945, with 17,000 soldiers dying in the Battle of Vienna, and a large memorial to them still stands in the capital’s Schwarzenbergplatz.

Austria has attempted to stay largely neutral ever since, and has maintained strong links with Russia as well as allies in the European Union and the United States, as well as not being a member of NATO.

Since the coalition between the centre-right People’s Party and the far-right Freedom Party took office, ties with Moscow have grown closer. 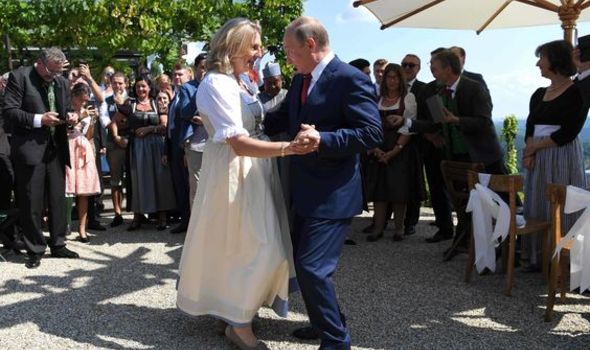 Perhaps tellingly, it also selected Mrs Kneissl, who before taking up her post in December was an academic and journalist, for the job.

She is an opponent of EU sanctions against Russia, and Austria refused to take part in the coordinated expulsion of Russian diplomats in March after the poisoning of former spy Sergei Skripal and daughter Yulia, which has been widely blamed on agents of Mr Putin.

Ms Kneissl invited Mr Putin to her wedding during his visit to Vienna in June, and the Kremlin confirmed he had accepted the invitation last week.

Cossacks clad in traditional fur hats joined forces with police to attack a protestors at an anti-Putin demonstration in May, and pro-Kremlin Cossack troops were subsequently enlisted “to ensure public safety” at the World Cup in June. 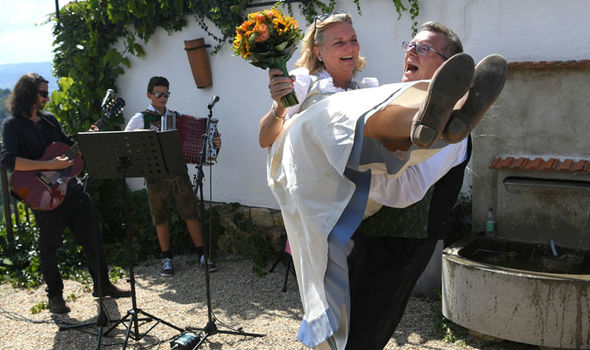 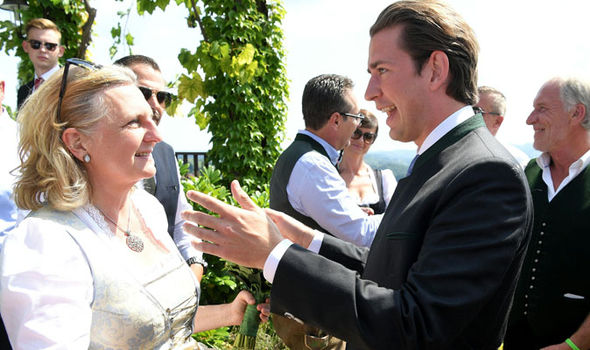 If you invite Vladimir Putin to your wedding, you are not neutral anymore

The news that Mr Putin was attending the event has been panned by opposition lawmakers in Austria.

Demanding Mrs Kneissl’s resignation, Michel Reimon, a Green Party member of the European Parliament, said the invitation had “squandered the good reputation of the country”.

Andreas Schieder, a lawmaker from the center-left Social Democrats: “How is Austria’s presidency of the European Union meant to live up to the government’s own claims of building bridges and being an honest broker when Austria’s foreign minister and chancellor are so obviously on one side?” 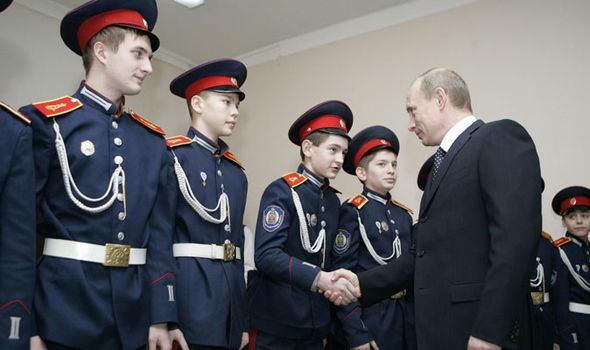 Meanwhile Ukrainian foreign affairs committee chair Hanna Hopko said:  “If you invite Vladimir Putin to your wedding, you are not neutral anymore.

However, Mr Strache praised Mrs Kneissl as a «bridge builder» as he congratulated the couple and wished them «all the luck in the world and eternal love!»

The international coverage of the visit would bring priceless publicity, he said, adding: «A better advertisement for Austria, its wonderful nature, dreamlike landscape and real life hospitality cannot exist!» 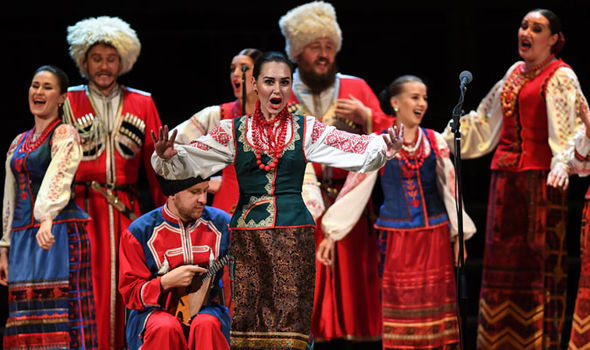 “From now on, Austria can’t be a mediator in Ukraine. Period.”

Mr Putin’s talks with Mrs Merkel are likely to centre on ongoing the conflicts in Syria and Ukraine.

Mrs Merkel spokesman Steffen Seibert said on Friday: “Russia is an international actor without whom the solution of various international problems is unthinkable.

“That’s the value of such meetings.”