We understand that players are playing for their careers: India batting coach Bangar 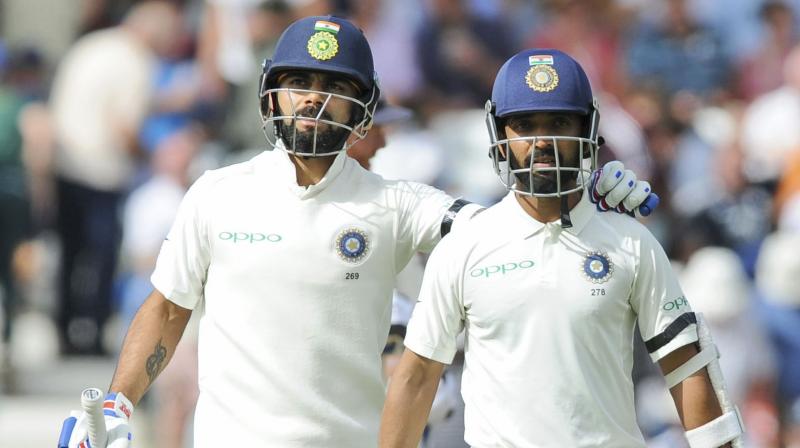 Nottingham: Assistant coach Sanjay Bangar says India's batsmen are under tremendous pressure and "playing for their careers" after their horror run in the first two Tests against England resulted in embarrassing defeats.

World number one India trail the five-match series 0-2, but put up a solid batting display on the first day of the third game to 307 for six at stumps.

"…the players themselves are under tremendous pressure — they are playing for their careers. We understand that," Bangar said at the end of first day's play.

"To make at times when things don't really work in your favour, it is important to maintain composure, have the same sort of sense whether things are going well or not going well. Maintaining your equilibrium, that helps."

The batsmen's poor performances had put a question mark on the support staff, but Bangar said that such pressure only comes with the job.

"All of us understand clearly there is no magic wand we can work on any batsman. You have to understand the last five Test matches we played abroad have been in really trying conditions except for the Centurion Test.

"Take the Johannesburg Test, which we from within the group believe was one of our best performances, not in terms of the number of runs but the victory we achieved in trying circumstances. So what we value is that Test win over any Test win we have had.

"And yes, handling pressure is part and parcel of any professional's job and we try and do whatever we can do, the support we can give and the plans that we can strategise."

Bangar has said that subtle changes in technique by the batsmen helped India at Trent Bridge.

Virat Kohli top-scored with a determined 97 while his deputy made 81.

"The most important thing was that opening partnership was according to our expectation. In the two Tests we were losing two or three wickets inside the first 15 overs and the middle order was walking in early in difficult conditions. Also the way they were batting was good," said Bangar.

Together, Kohli and Rahane added 159 runs for the fourth wicket to lay a solid foundation.

"The way Shikhar (Dhawan) made the changes to his batting, the way he reduced his bat speed, the way he played the ball later, these adjustments he made in the last 6-7 days, he should get credit.

"KL Rahul, too, was playing on the back foot, and he was reacting after the ball's movement. These changes the batsmen have made make me hopeful for the rest of the series.

"With five more innings left, if our batsmen can play in the same way, their performance graph will carry on to improve," he added.

Dhawan and Rahul put on 60 runs, which was India's best opening partnership outside Asia and West Indies since 2013.

"Overall I think the discipline was far, far better. The start Shikhar and Rahul gave us, that was crucial. We all know that with the Dukes ball first 10-15 overs can be crucial. Most teams if they bat well 30-35 overs and show discipline they can cash in later on," Bangar said.

About Cheteshwar Pujara's uncharacteristic hook shot dismissal, Bangar said, "That was a ball which had to be hit and it only goes on to show that things are only going to turn around pretty quickly for him because he is just one knock away."

India were rescued by Kohli and Rahane. Both batsmen stuck half-centuries, but fell short of their respective hundreds to hand the advantage back to England.

"We all know the conditions were pretty harsh at Lord's and before that the Test we lost was by a gap of 30 runs. I agree the performances of the batsmen were not to our expectations."

Losing Hardik (Pandya) in the last ball before the end of the day's play, or losing Pujara before lunch, on the stroke of lunch, there are areas we still look at correcting."

Talking about Rahane's recovery of form, he added, "Ravi coming out and saying that he is our pillar, he is still a pillar of Indian batting. That might have done a whole lot of good for his confidence. And, yes, certain adjustments even he made, which probably he can tell you better.

"His mindset was very clear. He was very positive, his feet were moving well. He was getting into good positions till the time he showed that, at times there can be a lapse in concentration which can lead to losing your wicket, which had happened in the previous Test.

It was left to Pandya and debutant Rishabh Pant to hold fort until end of play. Bangar was full of praise for the young batsman and said that he could lay the foundation of a better total with R Ashwin.

"We were all very surprised (at the six), but he is a confident cricketer. He has come through the ranks. He has played Ranji trophy, graduated in the India-A format, so his has been a gradual rise.

"He has tremendous faith in his abilities. The moment he hit a six, my mind went back to Vinod Kambli, because even he started his first-class career with a six. It requires some sort of gumption to do that. The spunk was pretty evident."

"I really appreciate and at the same time I just love his self confidence which reflects in his batting style. If Rishabh can play like that then he can be ideal for that batting position.