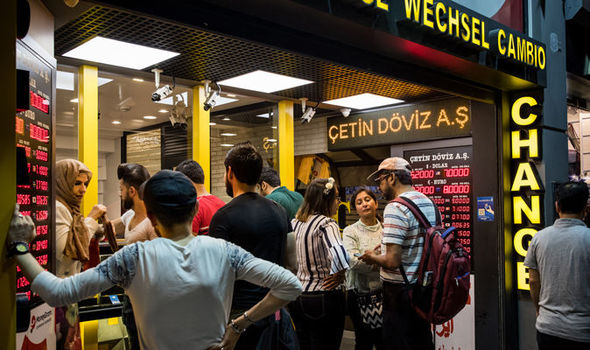 But there are fears that while tourists are reaping the benefits, the crash could plunge the country into crippling recession which could have serious knock-on effects across the global economy.

Stan Wallace from Ashington, Northumberland, who is on a two week holiday Hisaronu on Turkey’s popular southwestern coast, said: “The other day we paid £59 for dinner for eight of us, with top-quality food, mixed grill, drinks and everything.

At the start of the year the exchange rate was about 5.1 lira to the pound but on Monday last week it dropped to a record 8.87 to the pound which means a pint of Efes lager now costs the equivalent of £1.80.

But some British visitors do appear to be sparing a thought for the restaurant owners and shopkeepers on the receiving end of the crisis.

Janet Cowley, a foster carer and former police officer, said: “I’ve been paying for things in pounds just so the people here have some money. It’s terrible for them. Good for the tourists, though.”

Business owners were also concerned about what the future holds.

Murat Kocalar, owner of Wags Bags, said: “We buy the bags in lira, but used to set the price in pounds. Now they expect a lower price because of the rates going up.” 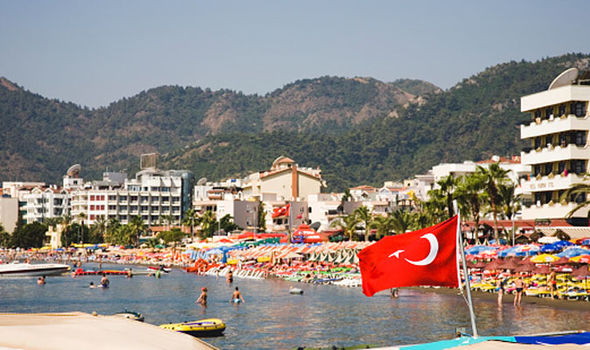 A British restaurant owner, whose businesses rely on imports bought in foreign currencies, said: “Yesterday we changed the prices into pounds to save our livelihoods.

“The fish for our fish and chips comes from Norway, so that’s dearer. We put everything in pounds so it’s more stable. We can’t keep printing menus. I hope it’s just temporary.”

But there are growing fears that worse is yet to come.

A diplomatic row between Turkey and the US over the detention of American pastor Andrew Brunson — which this month resulted in the announcement of US sanctions — has combined with existing problems facing the Turkish economy to make the lira the world’s worst-performing currency against the dollar this year.

A defiant President Recep Tayyip Erdogan has been accused of making matters worse by publicly backing Mr Brunson’s detention and refusing to make any moves to calm the nerves of foreign investors.

Yesterday he issued a chilling warning to outside forces “playing games” with his country’s fragile economy after ratings agencies Moody’s and Standard & Poor’s downgraded Turkey closer to junk status amid the currency crisis.

Mr Erdogan said: «Today some people are trying to threaten us through the economy, through interest rates, foreign exchange, investment and inflation.

«We are telling them: we’ve seen your games, and we are challenging you.» 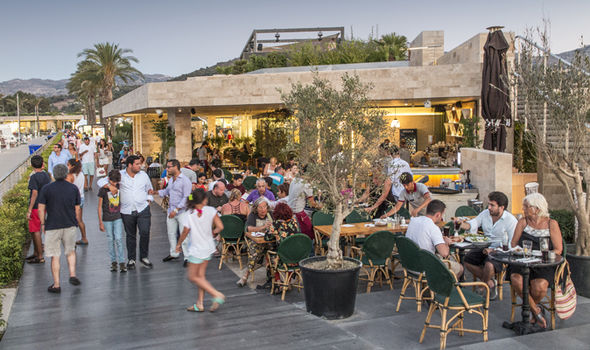 And in a thinly-veiled swipe at Donald Trump and the US he added: «We did not and will not surrender to those who act like a strategic partner but make us a strategic target.”

The lira has lost 40 percent of its value against the dollar this year with investors fearful of Mr Erdogan’s influence over monetary policy.

Heavy selling in recent weeks spread to other emerging market currencies and global stocks and deepened concerns about the economy, particularly Turkey’s dependence on energy imports and whether foreign-currency debt poses a risk to banks.