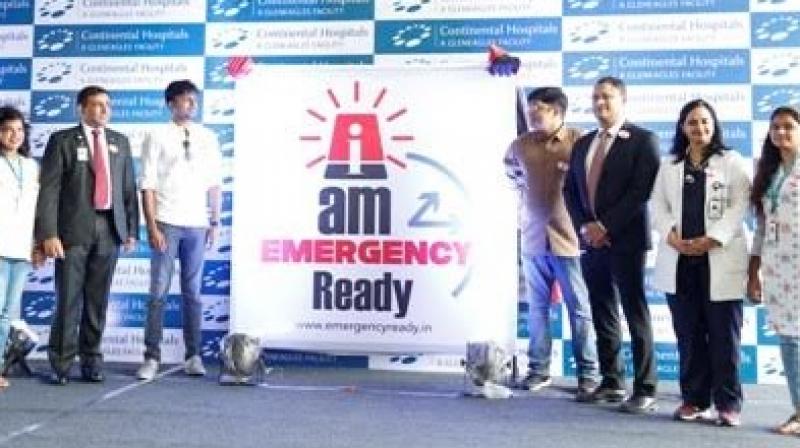 Continental Hospitals launched the ‘I am Emergency Ready’ emergency drive to raise awareness on emergency preparedness amongst the common people. The objective of the initiative is to mitigate risk and minimize loss during medical emergencies.

Launch of ‘I am Emergency Ready’ logo at Continental Hospitals

At the outset, the hospital acknowledged the critical support that the ER Doctors, Nurses & Paramedics offer to manage medical emergencies on a daily basis.

The launch that took place at Continental Hospitals in Gachibowli, Hyderabad with popular Telugu actors Priyadarshi Pullikonda & Krishnaswamy Srikanth Iyengar in attendance. Priyadarshi was seen in pivotal roles in Telugu movies such as — Pellichoopulu, Arjun Reddy and Awe.

To make India Emergency Ready, the Hospital seeks to train the general public on Bystander Life Support which will equip them to offer immediate care to anyone facing a medical emergency and keep the patient stable until professional medical help arrives.

The BLS training will be conducted for both individuals as well as corporates; and will also include everyday people like auto drivers, roadside vendors, school students and teachers, parents, social workers, security guards amongst others. The trainees will receive certification and an emergency toolkit at the successful completion of training.

Continental Hospitals CEO Faisal Siddiqui said, “The ‘I am Emergency Ready’ drive is one such initiative that we are proud to present. In times of medical emergencies, bystanders are often unable to do anything to stabilize the patient before professional help arrive. This results in the loss of critical minutes that leads to the worsening of the patient’s condition, at times even irreversibly. It is well-established that a person’s chances of survival is greatest if they receive medical care within a short period of time or the ‘golden hour’ following any severe injury. Thus, in trauma cases it is imperative for a person to be ready for a spontaneous intervention and through this initiative we aim to raise both awareness and preparedness required to identify and manage common medical emergencies, resulting in patients being stabilized before transportation to the nearest hospital.”

As part of the initiative, the hospital also instituted the ‘Good Samaritan Award,’ a platform to recognize, reward and appreciate those Good Samaritans who have helped victims in case of a medical emergency. The initiative seeks nominations from general public regarding individuals who has stabilized someone by providing basic life support treatment during a medical emergency or coordinated a swift evacuation in a critical emergency or donated blood or rendered any kind of unusual support in a medical emergency or have taken care of a person under a critical emergency condition, until help arrived. Nominations for the ward are open for two months from August 19, 2018. At the end of the nomination period, an esteemed jury will identify three individuals for their presence of mind and lifesaving action, as Good Samaritans. They will be be felicitated at a function and receive Rs. 20,000/- each in addition to a certificate.

The Hyderabad Benelli Owners Group pledged their support to this campaign by getting together their riders for this good cause. A group of 20 Benelli riders along with the hospital doctors and staff took part in a bike rally that was organized from the hospital to Cyber Towers, Madhapur to raise awareness about the importance of Bystanders Life Support training and to stress on the importance of being emergency ready.

Hyderabad Benelli Owners Group General Manager Mr. V E Sunder Rajan said, “Data suggests that the most common medical emergencies witnessed in the country are road accidents and other trauma related injuries, heart attacks or other cardiac related illnesses, strokes etc. In all these cases, time is crucial and administering adequate first response treatment could make all the difference.  We are happy to participate in such an initiative by the hospital and we hope this initiative will serve the society and make Hyderabad truly Emergency-Ready.”

In addition to this, the hospital also organized a flash mob with an appearance by Lord Yamadharmaraj, the God of death and two of his Yama Bhatas. A person who has dressed as Yama went around the locality of Gachibowli and Madhapur creating awareness of emergency preparedness. He distributed literature on the need for emergency preparedness and also vouched for taking up the BLS training as early as possible.

Disclaimer: This article has not been edited by Deccan Chronicle and is taken from a syndicated feed. Photos: NewsVoir.