A series of graffiti messages and posters have popped up in Barcelona encouraging local British tourists to jump off their balconies.

The shocking anti-tourist messages have sparked outrage since six Britons have tragically died from ‘balconing‘ — the trend of jumping from one balcony to another, or into a pool.

The wave of anti-tourist sentiment has escalated in recent months across Spanish cities popular with British holidaymakers, where ‘tourists go home’ has become a graffiti slogan.

In the latest effort against UK travellers, posters in Barcelona have read «Balconing is fun!» or «Please practice Balconing!»

The messages added that the balconing trend «prevent gentrification, improves neighbours’ quality of life, and reduces the risk of heart disease.»

These posters bear the logo of the ‘Anti-Tourist Action’ group, which claims that the mass tourist industry is ruining life for local Spanish residents.

They argue that British tourists in particular are spoiling the country and bringing very few benefits.

A spokeswoman for Barcelona city council said: “We reject these incidents and above all the message. They will be removed by the municipal cleaning services.” 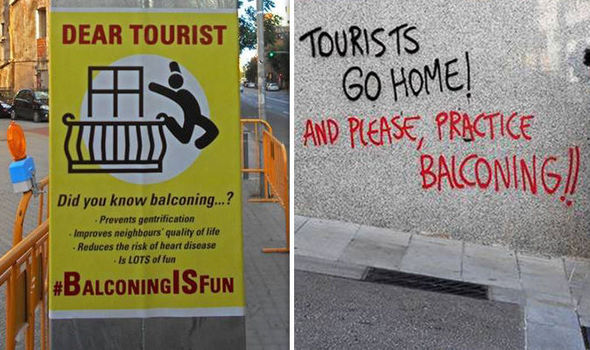 Previously, anti-tourist activists have voiced their fury at rowdy tourists who they claim urinate in public or pass out in the streets.

This comes just weeks after masked activists chained themselves to the Gaudi statue in protest against tourists.

Officers had to use bolt-cutters to free those who had tied chains around their legs and sculptures, which the protesters chose because of its iconic status.

Speaking to RT this week, one tourist said that she had seen «many, many violent messages against tourists» during her time in Spain. 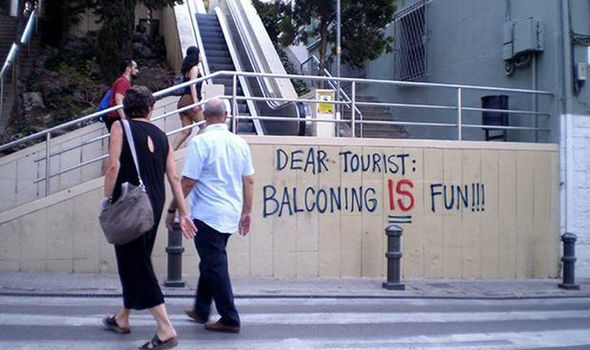 A number of Britons have died after falling from balconies at hotels and apartment complexes in Spain this year.

Last month, an 18-year-old boy died after falling from a walkway at an apartment complex resort in Magaluf.

Thomas Channon, from South Wales, was on his first ever holiday with friends celebrating his A levels when he died.